It was a delightful no-brainer to say yes in supporting Tom Hill’s book launch, “Making Character First.” Why?  Because I align whole-heartedly with his values.

And, I’ve been directly impacted by lack of corporate values – along with many others. I believe in Tom’s message and am happy to support his cause.

While working at Safety Kleen as a Senior Environmental Health and Safety Manager, I experienced a hostile take-over. Laidlaw Environmental won their bid despite Safety Kleen’s legal attempts to avoid a merger.

I remember that first day – learning that the Corporate Environmental Department had been let go, with the exception of a few IT people.  All my fellow colleagues, all that support – gone. Included were the 12 corporate attorneys I worked so closely with on sensitve, significant matters – gone. Along with the entire accounting department and executive management team.

My fellow field EHS Managers were also part of the mass layoff. Those of us in the Northeast were retained – those in the west and south were all released.

If that wasn’t shocking enough, we would all come to learn in the years that followed that the new management team was “cooking the books” and had done so for at least 5 quarters.

The company went into Chapter 11 bankruptcy, the first move made by the new executive turn around team. And as part of the restructuring, my entire department was let go 2 days before Christmas.

I don’t know what life would have been like if the Laidlaw management team would have dealt with the financials differently. I just know from the statements of those involved thought they could eventually fix what was wrong. But of course, in the end, that didn’t happen.

Safety Kleen isn’t the first company to have this experience. In fact, at that time, Enron was the big news maker.

It is my sincerest hope that Tom’s book reaches decision makers and thought leaders in corporate America so that they can be uplifted and reminded that character really does matter.

And as people of influence in their organizations, they can have impact in their companies and in the world at large through leading by example. 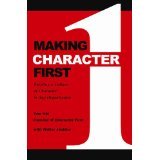 Making Character First by Tom Hill shares how organizations around the world are building a culture of character—which is very needed today.

This inspiring book is for all leaders—including managers, executives, parents, teachers, and coaches. Learn from Tom’s experience, and find practical ways to make character first in your circle of influence!

Be Impeccable With Your Word. Speak with integrity. Say only what you mean. Avoid using the word to speak against yourself or to gossip about others. Use the power of your word in the direction of truth and love.

Expect good things and they will come.

Hi I’m Brenda. I love helping people land their dream job because I know when work works, life works. When you know things aren’t working and you aren’t livin’ the dream, it’s time to change. Are you ready for your next opportunity? Read more

Who Else Wants a NEW Opportunity

Dare to Dream By Creating a Vision Board

Are Your Dreams Still On the Shelf?

Flex Your Trust Muscles and Embrace the Adventure

Are You in Love With Your Job?

We use cookies to ensure that we give you the best experience on our website. If you continue to use this site we will assume that you are happy with it.OkPrivacy policy